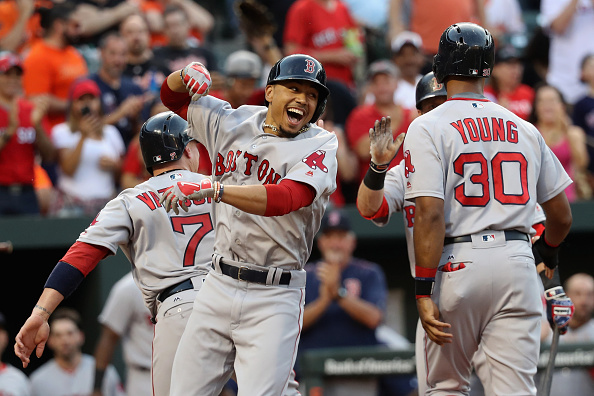 With a 2-2 split against the rival Baltimore Orioles, the Red Sox displayed every theme from the season so far.  We saw impressive pitching from unlikely sources, catastrophic pitching from seasoned veterans, and insane hitting on both ends.  While much of the series was disappointing and frustrating to watch, Mookie Betts and Steven Wright stood out with star performances-hopefully keeping both on track for All Star selections.

Betts is listed at 5.9, and 155 pounds.  Somehow, taking tips from his vertically challenged teammate Dustin Pedroia, he has found a way to become one of the most electric players in baseball.  Betts had an OK series against the Birds, meaning that he absolutely decimated the pitchers he was put up against.  He became the first leadoff hitter in MLB history to hit leadoff home runs in consecutive games, and went on to hit five (FIVE) home runs in the middle two games.  He finished the series going 8/17, and has put his early season slump to rest.  In the past seven days, Betts has 10 hits, with a .370 batting average.  He also had a fantastic catch on Tuesday, capping off a career game.

While Betts may be leading the charge, the Red Sox offense as a whole has continued to murder teams.  In the last seven days, the offense has produced: 86 hits, 19 doubles, and 17 home runs, all with a .290 team average.  While these stats only helped the team to a 4-4 record, their offensive prowess is without question.  As of June 2nd, Boston leads the majors in: hits (562, +65 from 2nd), doubles (136, +29 from 2nd), batting average (.296, +.16 from 2nd), and OPS (.856, +.62 from 2nd).  David Ortiz, hitting .347 with an OPS of 1.179 in all of May, is certainly doing his best to contribute.  Similarly, while somewhat unnoticed, is Xander Bogaerts‘ consistent excellence.  As I’m sure you’ll remember from my earlier piece (this is where I convince myself people are reading these), Bogaerts was destined for even more greatness.  With a few hits in Thursday’s game, he extended his hitting streak to 26 games- three shy of Jackie Bradley Jr.’s.  When Jackie Beisbol got to 20 games, people started to go bonkers.  Bogaerts has a real chance to go further, and, dare I say it, take a shot at the record.

Who is 31 years old, earning less than $520,000 in ’16, and the most consistent pitcher of the Red Sox pitching staff?  Only the GOAT, Steven Wright.  With another dominant performance (9 IP, 4 hits, 7 K, 2 ER), Wright has done everything he can possibly do to earn the title of an All Star.  Although he probably won’t make the cut; partly due to the terrible All Star selection process, and partly due to Kansas City’s existence, Wright has been an absolute savior for this Red Sox pitching staff.  Knowing that every five days you’re going to get at least seven innings of dominant pitching has to be a huge relief for Farrell.  Wright has shown he can handle the workload, which is partly his gamer attitude, and somewhat from his knuckleball approach.  With his average pitch lying somewhere in the 70 mph range, Tim Wakefield 2.0 will be saving his arm throughout the entire season.

Both Joe Kelly and Rick Porcello tossed pretty mediocre games.  Porcello, falling victim to another bout with igiveupamillionhomeruns-itis, shouldn’t worry too much going forward.  We’ve grown to expect the occasional dud from Slick Rick, and usually he’s saved with ample run support.  However, he will be counted on to provide steady pitching going forward, as the AL East becomes more congested.  Kelly, on the other hand, is in limbo.  He may be suffering from phenomenal-game hangover, which, although is a pretty BS excuse, seems to be an actual thing.  However, his performance (2 IP, 7 ER) really really sucked.  Kelly is dangerously becoming more similar to Clay Buchholz, in the sense that he either tosses a gem; or finds an early exit.

The relief pitching has also struggled.  They gave up 12 runs in the series, with uncharacteristic implosions from Robbie Ross Jr. and Junichi Tazawa.  I’m not looking too deeply into this, and I think getting away from Camden will do them all some good.

The Red Sox will travel back to Fenway for a quick homestead against the Blue Jays, and my head is already reeling from all the dingers Jose Bautista will send over the wall. The Sox have an ever-slimming lead in the East, with 1 full game ahead of the O’s.  A nice Toronto sweep would be just what the doctor ordered.